A decade later, he was recruited by Quintette Coal and moved to Tumbler Ridge, BC. for several years, then returned to Saskatchewan as Manager of Purchasing & Transportation for Cameco Corporation, the world’s largest uranium miner and producer.

At Cameco, Tom was heavily involved in in socio economic activities by developing and contracting with Northern Saskatchewan Indigenous businesses for the supply of materials and services to five remote uranium and gold mines.  His experience at Cameco included directing Supply Chain operations for two uranium refineries at Blind River and Port Hope, Ontario, as well as direct involvement with the Kumtor Gold project in Kyrgystan, CIS.

Tom was recruited from Cameco by the English River First Nation of Patuanak, Saskatchewan, serving for several years as Chief Executive Officer of Tron Power Inc., as well as Chairman of Mudjatik Enterprises, both band-owned entities.

After thirteen years at Nexen/Canexus, the company was purchased by Chemtrade Logistics. Tom went into Supply Chain logistics consulting for a year before accepting a position as Director Purchasing, Contracting and Funding Arrangements for the First Nations Health Authority in Vancouver, where he currently works.

Over his 40-year career, he has worked in five different industries across western Canada.

Tom is a member of Whitefish (Goodfish) Lake First Nation #128 and looks forward to the challenges of his new position with the Goodfish Lake Business Corporation. 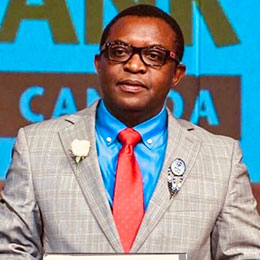 Noah Nemhara has been the CFO of Goodfish Lake Business Corporation since Feb 2014 and has been a key part of Goodfish executive leadership over the years.

Noah was the Interim CEO of Goodfish from Sept 2019 to Jan 2020 and CFO. He has worked for various companies that include The Dixie Auto Group, Magick Woods Limited, Gourmet Baker Inc. and Konica Minolta in Ontario. He graduated with a bachelor’s degree in Statistics and Mathematics in 1999, qualified as a Chartered Professional Accountant (CPA) and Certified General Accounting Canada (CGA) designation in Ontario and is licensed in Alberta. He completed the Certified Aboriginal Financial Management Designation (CAFM) from AFOA Canada in July 2019 and an Executive Certificate in MBA Essentials from London School of Economics and Politics in Jan 2020.

In addition to various ongoing Professional Development certifications, he also completed the Executive CFO Leadership Program through Institute of Chartered Accountants of Alberta  in 2015, Indigenous Leadership and Management Development  at the Banff Centre for Leadership in 2017, Lean Six Sigma Green Belt Certified in 2018 through Go Productivity Canada  and a Certified SAP Financial Consultant Designation from SAP A.G. Germany, in  2008.